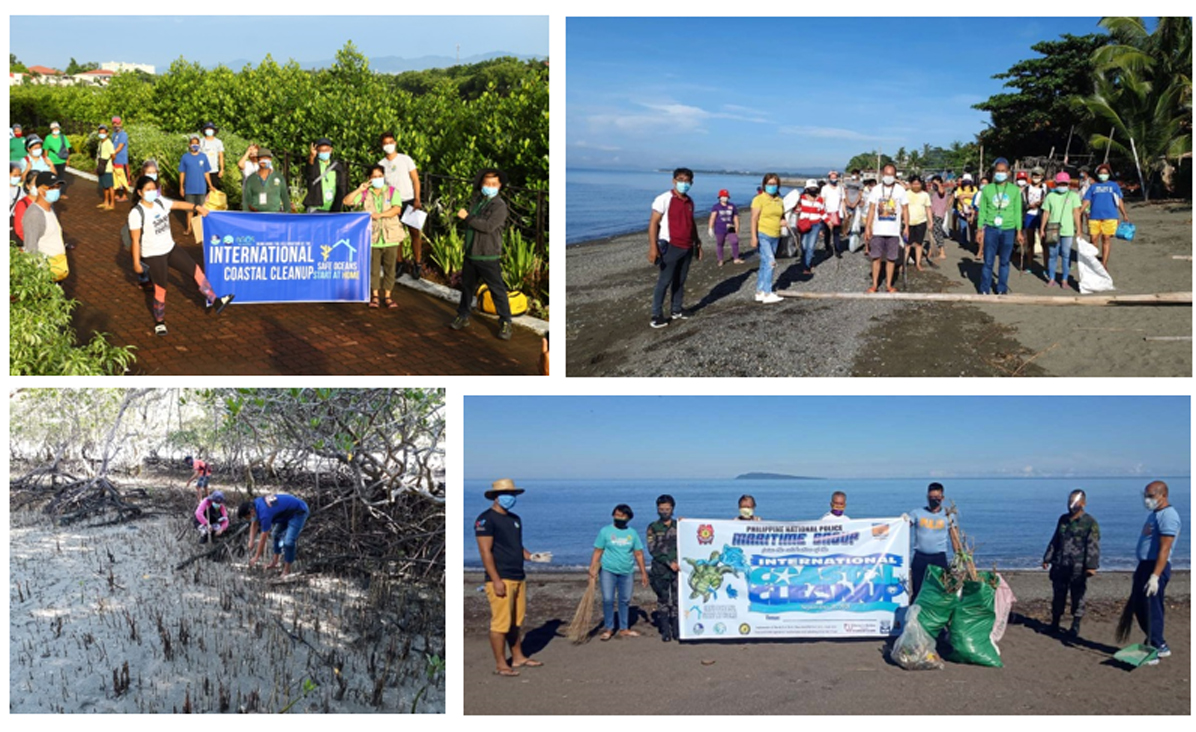 The Department of Environment and Natural Resources (DENR) Region 6 and its field offices conducted simultaneous coastal clean-up drives to raise awareness on waste management problems in Western Visayas in this typhoon season.
DENR Regional Office, Provincial Environment and Natural Resources Offices (PENROs) and Community Environment and Natural Resources Offices (CENROs) here in Western Visayas partners with different stakeholders, local government units (LGUs) and nearby coastal residents gathering volunteers to participate in the annual movement of International Coastal Clean-up (ICC).
ICC is the largest volunteer effort to protect the ocean’s health through picking up litters on beaches, coasts, rivers, waterways and even underwater dive sites and record information on the trash being collected.
This year’s event was celebrated with limited amount of volunteers observing physical distancing adhering safety protocols due to the rising cases of coronavirus disease (COVID-19). Thus, people were encouraged to do their part at home by clearing the trash on the waterways or coasts near their houses.
DENR Regional Office initiated a clean-up activity at the Iloilo River Esplanade. Volunteers collected approximately 169.50 kilograms of trash scattered in the river banks.
In the northwest part of Panay Island, PENRO Aklan also took their part through simultaneous clean-up within their communities’ waterways and coastal areas. Residents and volunteers were able to gathered approximately 500 kilograms of wastes which mostly plastics from food packaging, rubbers, metals, wires and straws that could danger the lives of marine creatures.
CENRO Guimbal was able to conduct the clean-up activity at the coastal areas of Brgy. Buyu-an, Tigbauan, Iloilo and collected a total of 36.4 kilograms of waste. Trashes was sorted, weighted and disposed properly at the barangay’s Material Recovery Facility (MRF).
The province where the mountains meet the sea called Antique, coastal areas of Brgy. Poblacion, Culasi was cleaned with the help of municipality’s Philippine National Police (PNP) Maritime Group and nearby residents as they volunteered during clean-up activity and collected a total of four sacks of trash.
Meanwhile in the Negros Island, CENRO Bago City partnered with the LGUs of San Enrique pave the way of clearing trashes in the coastal areas collecting 17 sacks of trash composed mostly of plastics that entangled in the mangrove trees.
Simultaneous coastal clean-up activities were also conducted in the lone island of Guimaras collecting approximately 450 kilograms of trash on coastal areas and along Taklong Island National Marine Reserve (TINMAR) protected area.
According to National Oceanic and Atmospheric Administration, “Scientists estimate that 50-80% of the oxygen production on Earth comes from the ocean.” Thus coastal clean-ups also help in saving the ocean biodiversity and mitigate the effects of climate change.
Clearing up the waterways at our beloved homes will greatly help during the upcoming typhoon as it will lessen the debris and drastic effects of the typhoon aftermath.
“Cleaner waters greatly help in growth of marine life production. Although coronavirus disease (COVID-19) brought adverse effect on public health and economy, it allows the ocean to breathe as carbon emission slowed due to less sea travel. Small acts of cleaning the ocean can bring impact to climate change mitigation. Being volunteers during clean-ups help us to become better stewards of our environment.” said regional executive director Francisco E. Milla, Jr./DENR6/ASCC/JLR/LGGL