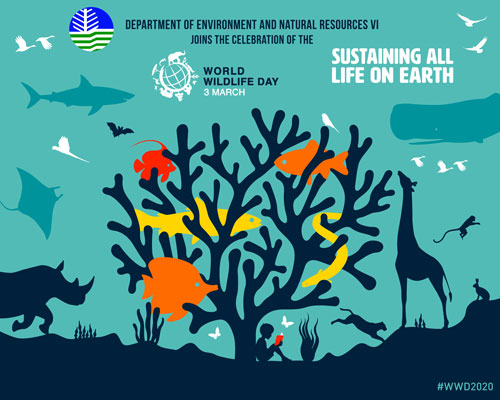 The Department of Environment and Natural Resources (DENR) in Western Visayas celebrated World Wildlife Day (WWD) on March 3, 2020 with the theme “Sustaining All Life on Earth.’’ The celebration aims to promote the importance of the varieties of wild fauna and flora, to raise awareness of the threats to species and to protect and conserve wildlife resources.
The Philippines is the second largest archipelago in the world with 7,641 islands. Its population of over 100 million is projected to reach 125 million by 2030. It is also one of the 17 mega-diverse countries with unique wildlife species.
The country is abundant in wildlife species and resources. It has more than 52,177 described species of which half are endemic. These species include amphibians with 114 species and reptiles with 342 species. It is also known as the 4th most important country in bird endemism with 695 species and 5th in the world in terms of total plant species.
Although the country is biodiversity-rich, it also faces perilous circumstances. Wildlife crime is the fourth most lucrative illegal business in the Philippines after narcotics, human trafficking and arms. Illegal Wildlife Trade (IWT) is estimated to cost P50 billion including the market value of wildlife and its resources and their ecological role and value, damage to habitat caused by poaching, and loss of potential ecotourism revenues.
IWT is driven by domestic and international black markets which thrives on exotic pet trade that gets its supply from poaching activities. Meat from wildlife is considered as luxury food, and scales and skins are made into ornaments and jewelries. Some species are used for traditional medicine that are believed to cure HIV/AIDS thus causing prices to soar to thousands of pesos.
In Western Visayas, the International Union for Conservation of Nature’s (IUCN) Red List classified five key species in the region as follows: Visayan warty pig (Sus cebifrons, Rufous-headed hornbill (Rhabdotorrhinus waldeni, and Negros bleeding heart pigeon (Gallicolumba keayi) as Critically Endangered (CR); and the Philippine spotted deer (Rusa alfredi) and Visayan hornbill (Penelopides panini) as Endangered (EN).
To combat illegal wildlife trade and its economic, environmental and social impacts, the DENR enforces environmental laws particularly Republic Act No. 9147 or the Wildlife Resources Conservation and Protection Act which safeguards Philippine flora and fauna.
The regional office confiscates illegally traded wildlife, and conducts continuous information, education and communication (IEC) campaign to raise awareness in saving these species.
“We depend on biodiversity to live and survive here on Earth thus in our hands, lies the power to save and preserve these wildlife species for a balance and healthful ecology,” said Regional Executive Director Francisco E. Milla, Jr.
Enhancing biodiversity conservation is one among the ten priority programs of Environment Secretary Roy A. Cimatu.###DENR6