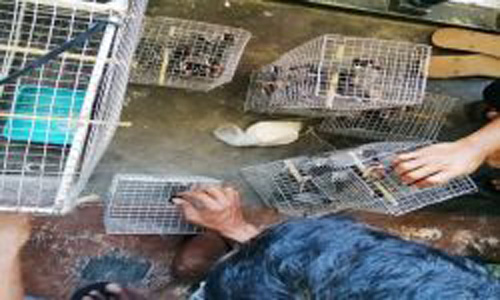 A total of forty birds sold near the Pagadian City Public Market were rescued through a joint operation between the Department of Environment and Natural Resources 9 and the Philippine National Police (PNP) Maritime 9 on January 17, 2020.

The team was able to confiscate 38 heads of Java Sparrow, one (1) Scaly-breasted Munia and one (1) White-eared Brown-dove sold by two brothers aged 19 and 14, residents of Barangay Gubac, Pagadian City. The Java Sparrow is classified as endangered by the International Union for Conservation of Nature or IUCN.

DENR 9 Regional Executive Director Crisanta Marlene P. Rodriguez said these wildlife are not supposed to be domesticated or kept as pets. “Mere possession of wildlife is a violation of RA 9147 otherwise known as the Wildlife Resources Conservation and Protection Act or the Philippine Wildlife Act,” added Rodriguez.

Trading of wildlife and collecting, hunting and possessing of wildlife, their by-products and derivatives are illegal acts under Chapter 4 of RA 9147.

Since one of the violators is a minor, the two brothers were released after signing an agreement that formal charges will be filed against them should they repeat the same offense.

After a thorough physical assessment of the birds in the DENR 9 Regional Wildlife Rescue Center in Tukuran, Zamboanga del Sur, these were declared in good health and were subsequently released in Barangay Mahayahay, Pagadian City, where the offenders captured the said birds.