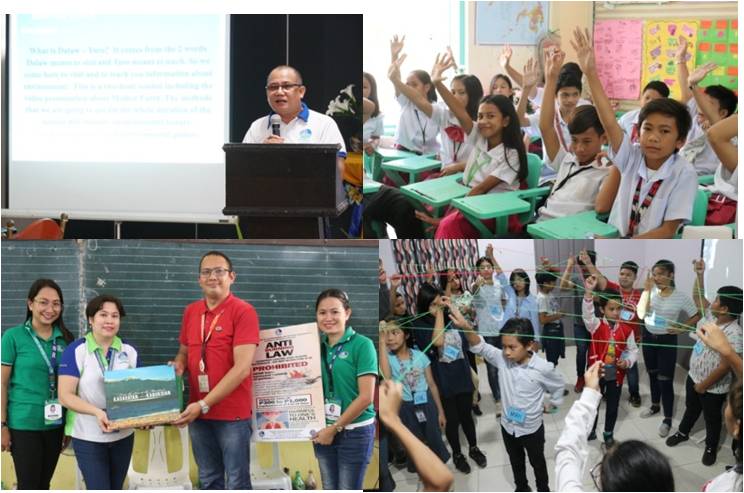 DENR-6 Regional Public Affairs Office (RPAO) Chief Artemio Salvador C. Colaciongave a briefing on the DalawTuro to the schools’ academic personnel for the inclusion of environmental information and biodiversity protectionin the students’ lessons.

Western Visayas is home to a number of critically endangered endemic species that are threatened by extinction if these are not protected.
Colacion encouraged the teachers to make the students aware of these local species to encourage them to take action for their protection. “We shouldn’t wait for the time where children will only see pictures of these local species in books due to our lack of discipline and involvement in their protection and conservation,” Colacion said.

The DT sessions started with the introduction of members then a pre-test to gauge the knowledge of the participants on environmental laws, issues and concerns. The students were then taught the DT clap and grouped to represent air, water and land.

This was followed by the mind setting, describing an environment surrounded by trash, a stage play on waste disposal, and a lecture on Ecological Solid Waste Management. A game on waste segregation which aims to have the students identifytrash as biodegradable or non-biodegradable was also part of the DT.

Other activities of the DT included a lecture on biodiversity and its importance and the protection and conservation of species and the environment. The DT team also conducted the Web of Life activity where the participants represented man, air, water, land and species toform a web. They then connected themselves to each other according to their needs until they lost grip of the rope to convey the slow deterioration of the ecosystemand to show that they need to take actionto save the environment. A post-test was given toassess the learningsof the participants.

DENR 6 Regional Executive Director Francisco E. Milla mandates programs such as DalawTuro to teach the younger generation the need to preserve the environment for sustainable living and for a better future.

“I am hopeful that Boracay will be an island resilient to disasters and will practice zero waste disposal. I encourageeveryone to avoid single use plastics,” Milla said.
Plastics take hundreds of years to decompose thus the DT activity is anchored to Republic Act 9003 or the Ecological Solid Waste Management Act of 2000, among others, one of the priority programs of Environment Secretary Roy A. Cimatu.

DalawTuro is a non-traditional and participative form of information dissemination to raise public awareness on environmental protection for sustainable development. It comes from two words Dalaw means to visit and Turo means to teach. It is a two-hour session that includes environmental lecture, skits and games, and aims audience interactionto impart the need to take immediate action on current environmental issues, strengthen environmental laws and protect biodiversity.