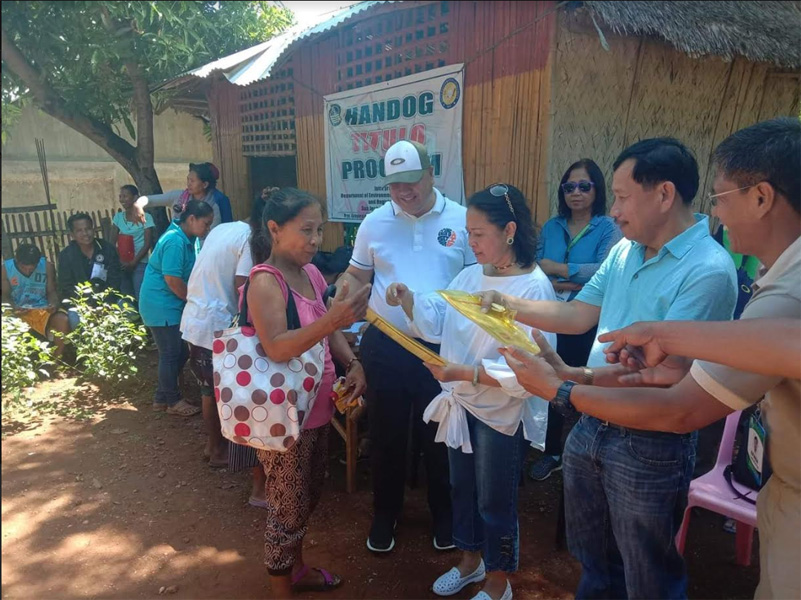 The Department of Environment and Natural Resources recently distributed 202 agricultural and residential free patent applications in the municipality of San Jose in Occidental Mindoro following the simultaneous distribution of free land titles in the island provinces of MIMAROPA Region on September 27 -28, 2019.
In a short program held at Brgy. Catayungan in Ilin Island, Provincial Environment and Natural Resources Officer (PENRO) Ernesto Tanada underscored the partnership of national agencies and local government units (LGUs) in expediting the issuance of free land titles as a step in fulfilling AmBisyon Natin 2040 which envisions the aspiration of Filipinos to enjoy a strongly rooted, comfortable and secure life (Matatag, Maginhawa at Panatag na Buhay).

Representative Sato urged the recipients of the land titles to plant at least 10 trees in their lands to combat the ill effects of climate change.

Vice Governor Peter Alfaro congratulated the beneficiaries and reminded them of their obligations as land owners.

“Declare your title to the Assessor’s Office. Be responsible enough to pay your corresponding real property taxes,” Alfaro said.

CENRO Efren Delos Reyes of San Jose expressed hope that such initiative would inspire fellow government workers to continue the delivery of prompt and effective service to the public.

The “Handog Titulo Program Para sa Mamamayan” is a continued joint effort of the national government through the Department of Environment and Natural Resources, Registry of Deeds and LGUs. The program is also a part of the government’s land disposition program by virtue of Republic Act No. 10023 or the Residential Free Patent Act.

"Under the DAO, we bring our services closer to the people by fast-tracking the processing and issuance of public land patents to deserving and qualified individuals," DENR MIMAROPA Regional Executive Director Henry Adornado said.

Secretary Cimatu also signed DAO 2019-04 which calls for the conduct of nationwide Handog Titulo programs every September in celebration of Lands Anniversary.

On September 27 - 28, DENR MIMAROPA in partnership with LGUs held a simultaneous distribution of residential, agricultural and special patents that granted absolute ownership to private individuals and institutions in the region. A total of 1,479 land titles were issued – 638 in Occidental Mindoro, 184 in Oriental Mindoro, 561 in Marinduque (561) and 96 in Romblon.

“We envision that absolute and responsible land ownership would empower our people, and eventually spur economic and social progress in MIMAROPA,” Adornado concluded. (With reports from MIMAROPA PENROs, CENROs) ###