The Department of Environment and Natural Resources (DENR) has inked a five-year agreement with the Government Service Insurance System (GSIS) and three major firms in the industry sector for the rehabilitation of the Upper Marikina River Basin Protected Landscape (UMRBPL) under the Expanded National Greening Program (ENGP).

In a memorandum of agreement (MOA) with the DENR-Region 4A (CALABARZON), 70 hectares of ENGP-graduated sites inside UMRBPL will be sustained and protected by GSIS, together with D.M. Consunji Inc. (DMCI), Toyota-Oben Group of Dealers (TOGD), and Meralco Industrial Engineering Services Corporation (MIESCOR) .

“These ENGP-graduated sites are areas turned-over to the DENR by the people’s organizations and local government units after fulfilling their three-year site development contracts to raise tree plantations,” Limpiada said.

The adopted sites under the five-year agreement comprised four separate ENGP areas in Sitio San Ysiro, Brgy. San Jose in Antipolo City, which the DENR has set aside for the “Adopt-a-Site Program” to ensure continued maintenance and protection of the ENGP sites under a Public-Private-Partnership (PPP) scheme.

“Common to these four areas is they are the most challenging to maintain and protect in their respective NGP plantation sites, owing to their location. Really, we cannot do it alone and we need your help,” Lampiada told DENR partners during the agreement signing on March 28.

Launched in 2011 through Executive Order (EO) 26, the six-year National Greening Program (NGP) aimed to reforest 1.5 million hectares of denuded forestlands in the country.

It was extended until 2028 under EO 193–now known as the ENGP—for the continuation of reforestation efforts in the country’s remaining degraded forestland.

The private firms will initially shell out P3.1 million, of which P2.01 million will come from GSIS; P360,000 from DMCI; P108,000 from TOGD; and P36,000 from MIESCOR to cover preparatory activities such as seedling production plantation enhancement and maintenance and protection activities.

The ADP and AWFP give a detailed accounting of costs and corresponding activities to be implemented by the Malayang Samahan ng Mga Katutubo ng Antipolo City (MASAKA) Inc. whose members represent about 180 households of Dumagat-Remontado living within the adopted areas.

The MOA also cited a provision allowing for the extension of the undertaking for another five years or more “upon completion of the development activities of the project as stipulated in the five-year development plan.”

Under the MOA, MASAKA will prioritize the employment of indigenous peoples and members of organized upland communities within the vicinity. ### 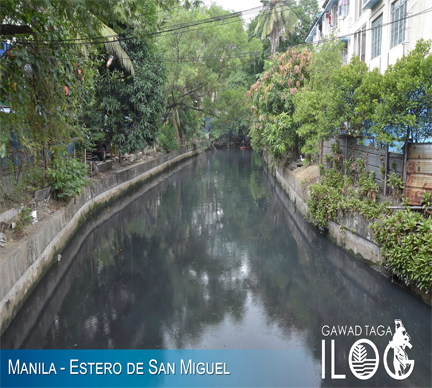 The Department of Environment and Natural Resources-National Capital Region (DENR-NCR) has recognized the Estero de San Miguel in Manila as Metro Manila’s “most improved estero” during the 2nd Gawad Taga-Ilog awarding ceremony on March 22.

The Gawad Taga-Ilog recognizes the efforts of local governments in Metro Manila—barangays in particular—in keeping their waterways clean and trash-free, as well as their active participation in the ongoing rehabilitation of Manila Bay.

It also encourages change in the attitude and outlook of Metro Manila residents for their role in keeping and maintaining waterways clean.

This year’s grand winner for the Most Improved Estero was Estero de San Miguel.

The awarding ceremony was also in time with this year’s celebration of the World Water Day under the theme, “Groundwater: Making the Invisible, Visible.”

DENR Acting Secretary Jim O. Sampulna commended the search for most improved estero, noting that it should be “replicated in other regions, especially selected areas of the Manila Bay regions.”

“This should be done to recognize the efforts of local government units, partners, stakeholders, and communities in cleaning, restoring, and protecting our waterways,” Sampulna said in his speech delivered by Undersecretary for Field Operations—Luzon, Visayas, and Environment Atty. Juan Miguel Cuna.

Judges for Gawad Taga-Ilog 2.0 include DENR officials and partners who are professionals in the field of environmental protection, possess independence, which means being free of any loyalties, duties or interests that might inappropriately influence the performance of a judge’s functions, manifest impartiality, and have a sense of perspective.

DENR-NCR Regional Executive Director Jacqueline Caancan said the Gawad Taga-Ilog was launched in 2020 “not to promote competition but to inspire cooperation among our partner barangays.”

“Indeed, Gawad Taga-Ilog is built on the premise that Manila Bay is a watershed. All rivers and esteros within the watershed drain their waters—together with all the liquid and solid wastes from our households, offices, factories, etc.—to Manila Bay. Cleaning the historic water body therefore necessitates an integrated or ecosystem-based approach, from ridge to reef,” Caancan said.

In 2020, a total of 33 waterways were nominated with three barangays emerging as winners, which include Barangays NBBS Dagat-Dagatan and Bangkulasi in Navotas City as 2nd runners-up; Barangay Marikina Heights in Marikina City as 1st runner-up; and Barangay Lingunan in Valenzuela City as grand winner. ### 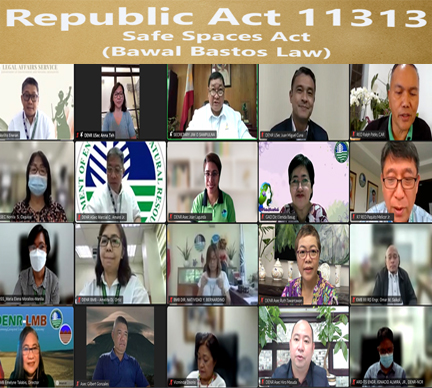 The Department of Environment and Natural Resources (DENR) spearheaded an orientation on Republic Act (RA) 11313 or the Safe Spaces Act of 2019—also known as the “Bawal Bastos” Law—for its executives nationwide to reinforce awareness on sexual harassment in the workplace.

“This management will not tolerate any big or small acts of harassment. I, not only as your Secretary but as a father and a good shepherd, therefore call on our GAD committees nationwide led by Undersecretary Atty. Analiza Rebuelta-Teh to leave no stone unturned to implement the Safe Spaces Act,” DENR Acting Secretary Jim O. Sampulna said.

The orientation served as an avenue to familiarize the DENR officials on Republic Act (RA) 7877 or the Anti-Sexual Harassment Act of 1995, as well as punishable acts, liabilities, and penalties under RA 11313 and Civil Service Commission (CSC) Memorandum Circular No. 11, series of 2021.

The officials were also briefed on the process of filing complaints to the DENR’s Committee on Decorum and Investigation (CODI) on work-related sexual harassment incidents.

The orientation was given by Teh, DENR Undersecretary for Finance, Information Systems and Climate Change.

Teh is also the chair of the National GAD Focal Point System and DENR Central Office CODI.

RA 11313 states that officials or heads of offices will be held liable for not taking action on reported acts of gender-based sexual harassment committed in the workplace.
“We, as officials, need to come up with measures to encourage victims to speak up. We should practice a zero tolerance policy towards these kinds of actions within the DENR,” said Teh.

She added: “Even if we have these laws, these are not enough as deterrent for sexual harassments. It has something to do with our values, culture, and how we look at our women and men that we need to develop. It is rooted on a much deeper scale that is why we need to look at it in a much wider context to prevent such acts.”

The DENR GAD office is planning to hold skills development for CODI members on understanding behaviors, conducting investigations sensitively, and conveying mental health resources and setting up of a counseling program for employee victims.

This will be part of the “Bawal Bastos sa DENR” campaign for the DENR Central Office, bureaus, attached agencies, and regional offices.

In cooperation with the Department of Social Welfare and Development and the Philippine Commission on Women, the DENR also held on March 22 a webinar for the DENR CODI members nationwide on Adopting a Culture of Safety and Safe Work Spaces.

DENR employees were given an orientation on the Safe Spaces Act on March 29.

According to a recent Social Weather Stations Survey commissioned by the Commission on Population and Development, 25 percent of Filipino adults in the country have experienced harmful acts such as physical, sexual, and emotional violence. ### 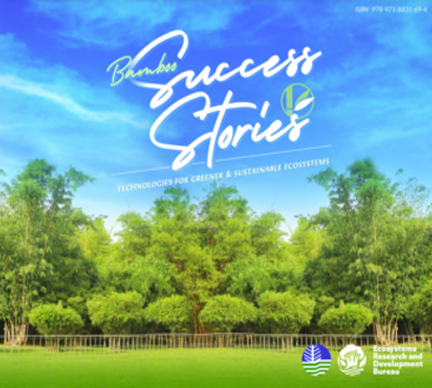 In the past, ERDB engaged in numerous studies on the use of bamboo in achieving ecosystem restoration, plantation establishment, carbon sequestration, and many others.

The six success stories include: 1) Greening the foothills of Lupao; 2) Barren no more: How an idle land became the pride of Ligao City; 3) Knock on bontong: Taking a chance with giant bamboo; 4) Getting rid of entanglements: Maasin’s strategy to regain bamboo productivity; 5) 3-in-1 bamboo magic in Davao del Norte: An expected route of bamboo adoption in Davao del Norte; and 6) Building livelihood on biodiversity conservation.

According to ERDB Director Maria Lourdes G. Ferrer, CESO III, ERDB will continue to innovate and develop more technologies for the Filipinos and the fragile ecosystem in the country. ERDB also ensures the public that it will continue to engage the citizens and capacitate them through various technology transfer and extension initiatives.

The featured stories in the book prove that scientific knowledge is more powerful when it is translated, packaged, and extended to the communities. It will be available at ERDB’s official website at https://erdb.denr.gov.ph. ERDB will also be releasing a printed version of the book. / Allysa Marie C. Federio, TTD 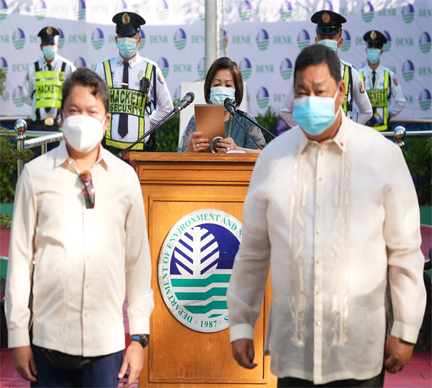 The Department of Environment and Natural Resources (DENR) was recognized by the Presidential Anti-Corruption Commission (PACC) with a Bronze Excellence Award for its outstanding performance in complying with the commission’s anti-corruption program, “Project Kasangga: Aksyon Kontra Korapsyon.”

The Bronze Excellence Award was presented to the DENR during its flag-raising ceremony at the Central Office in Quezon City on March 14.

The DENR was given recognition for its continuing efforts in strengthening its anti-corruption systems and processes in support of President Rodrigo Roa Duterte’s campaign on good governance and public accountability, as reflected by its accomplishments as a partner agency of the PACC under Project Kasangga.

Project Kasangga: Aksyon Kontra Korapsyon is a holistic approach to fighting corruption that was launched by PACC on Sept. 3, 2021.

The program supports President Duterte’s firm commitment to fight corruption by institutionalizing anti-corruption coordinating councils within government agencies and at the national level chaired by the President.

Under the program, the councils are tasked to investigate cases of graft and corruption, conduct lifestyle checks, and lead fact-finding inquiries among its ranks.

The Anti-Corruption Committee (ACC) Excellence awardees were chosen based on their submitted deliverables from the PACC; active and relevant participation in NACCC activities; provision of a list of awards/citations received from Jan.-Dec. 2021 with a significant impact on good governance; and their favorable public perception--all of which were fully complied by the representatives of DENR.

During its launch, the members of the DENR Central Office CAC and the DENR Regional CACs discussed the improved anti-corruption processes in accordance with the requirements of the PACC, and in harmony with the existing processes of the department. ###