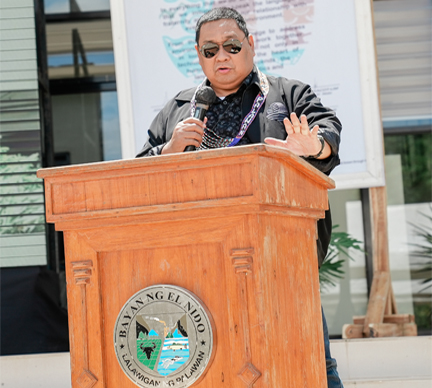 Apart from recognizing the importance of the establishment of sewage and solid waste treatment plant (SSTP) such as the one in El Nido, Palawan, Department of Environment and Natural Resources (DENR) Acting Secretary Jim O. Sampulna also urged local officials to educate and inspire the public to achieve effective and sustainable implementation of the proper waste management practices.

Sampulna said that while the SSTP helped reduce the fecal coliform level in El Nido, that alone could not fully protect the environment from further degradation if people will not contribute to its conservation.

Sampulna visited El Nido, Palawan, on April 2 to commend the efforts of the municipal and provincial governments on the construction and operation of the SSTP, which was inaugurated in September 2021.

The 490-million state-of-the-art SSTP, which is in Barangay Villa Libertad, is designed to address water pollution from untreated sewage discharge and garbage waste disposal.

It has been benefitting the residential and commercial establishments from at least 18 barangays in the municipality of El Nido.

The facility has a capacity to generate about 2,400 cubic meters of wastewater per day, which made it more efficient than any other sewage treatment plants in Palawan.

In 2018, the DENR ordered a six-month rehabilitation of El Nido after finding out that improper sewage discharges from residential and commercial establishments significantly contributed to the degradation of the island’s water quality.

The activity in El Nido was in line with this year’s World Water Day celebration under the theme, “Making the Invisible, Visible,” to remind Filipinos on the importance of freshwater and recognize the initiatives of local government units (LGUs) in abating water pollution.

Sampulna called on other LGUs to follow the example of Palawan, and urged top officials of DENR MIMAROPA Region to ensure excellent public service by performing their best for the interest of the people.

“Magtrabaho kayo ng maayos. Make sure you are in control of the situation but never use your position or authority for personal gain,” the Secretary added.

DENR Undersecretary for Field Operations Luzon, Visayas and Environment Atty. Juan Miguel T. Cuna said the Palawan SSTP sets the tone for what should be done in the provinces of the country.

Cuna cites that the treatment plant implemented two of the most important laws in environmental protection – Republic Act (RA) 9275 or the Philippine Clean Water Act of 2004 and RA 9003 or the Ecological Solid Waste Management Act of 2000. ### 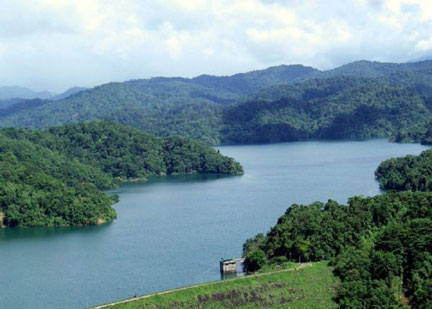 The Department of Environment and Natural Resources (DENR), through the National Water Resources Board (NWRB), continues to closely monitor the water level in Angat Dam and its operations amid its low-set water level.

Acting Environment Secretary Jim O. Sampulna said members of the NWRB’s Technical Working Group in the management of water supply from Angat Dam are “keeping a close eye on the dam’s water elevation to avert a looming water crisis with the dry season underway.”

“Through the NWRB, we have already laid down preventive measures such as cloud seeding so that the public, especially those in Metro Manila, is assured of a steady water supply with the ongoing COVID-19 pandemic,” Sampulna said.

This increase is mainly due to the shear line or tail-end of a cold front and a low-pressure area in the Mindanao region.

The widespread rain shower, which was experienced in the majority of Luzon region, is expected to further raise the water level in Angat Dam caused by inflows from runoff water.

According to the latest rainfall forecast and Angat Dam water level simulation, the lowest dam water level will reach 183.98 meters in June. Hence, it may not breach the minimum operating water level of 180 meters.

The NWRB has approved a water allocation of 50 cubic meters per second (CMS) to the Metropolitan Waterworks and Sewerage System from April 1 to 15, and five CMS to the National Irrigation Administration from April 1 to April 30.

Although the increase in water elevation slightly improved the current and projected level of the dam, the water level in the dam is still not secured.

The public is urged to continue implementing water conservation measures in their households, workplaces, and businesses. Aside from saving freshwater from taps, other water efficiency methods such as rainwater collection and water recycling can also be adopted. ### 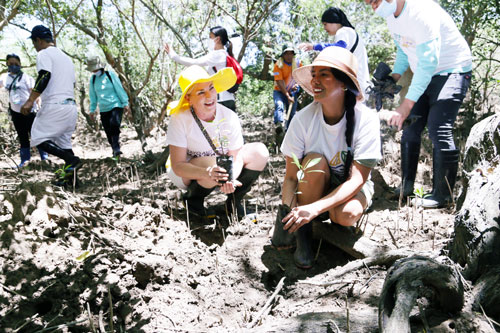 Department of Environment and Natural Resources (DENR) Acting Secretary Jim O. Sampulna is looking forward to more partnerships with organizations and local communities that actively promote the government’s activities on environmental protection, following the eco-tour and mangrove tree-planting activity in Lobo, Batangas on March 22, in time with the celebration of the World Water Day 2022.

“The mangrove tree-planting activity is a result of a fruitful partnership with the municipality of Lobo. We hope that the partnership forged by the DENR will spark inspiration for more alliances with organizations and local communities in pursuing activities on environmental protection such as this,” said Sampulna in his speech read by DENR Community Environment and Natural Resources Officer-Batangas City Allan Willard Estillore.

The activity was highlighted with the signing of the Environment and Natural Resources Partner’s Commitment, led by the DENR’s Strategic Communication and Initiatives Service (SCIS) and Lobo municipal government for the conservation of environment and promotion of sustainable tourism.

Under the commitment, the municipality of Lobo pledged to actively support the initiatives of the DENR and to practice actions that would help the environment such as avoiding the use of unnecessary plastic materials, promoting the use of alternative environment-friendly materials like bamboo tumblers, reusable water containers and reusable straws, and promoting the use of public transportation or bicycles when going to the office and other destinations.

Both parties will also mobilize and encourage their employees to demonstrate environmental protection within their households and communities by practicing proper waste disposal, including reducing, reusing, or upcycling materials; urban gardening; and taking part in cleanup and tree planting activities.

Lobo Mayor Gaudioso Manalo expressed his gratitude to the DENR and Noble Queen of the Universe Ltd. Inc. (NQULI) for choosing their municipality as a partner for environmental conservation and protection.

“We hope for your untiring support to our locality and to our environment,” Manalo said.

SCIS, through its Strategic Alliance and Environmental Partnership Division, also facilitated the partnership between the municipality of Lobo and the NQULI for a mangrove tree-planting activity and other sustainable development activities through a memorandum of understanding.

NQULI is a non-governmental women’s organization that aims to strengthen sisterhood around the world and to enjoin women who have the heart to help and uplift the condition of communities across diverse societies. 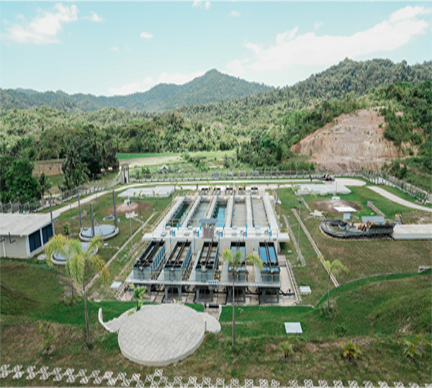 Department of Environment and Natural Resources (DENR) Acting Secretary Jim O. Sampulna commended the local government of Palawan province and El Nido town for their efforts to control and lessen water pollution through the establishment of a sewage and solid waste treatment plant (SSTP).

“I am calling all the governors around the Philippines to replicate what the Palawan and El Nido local governments have done here to improve the water quality and protect our coastal bodies,” Sampulna said during a site visit to the SSTP on April 2.

The SSTP in Barangay Villa Libertad was designed and built to address water pollution from untreated sewage discharge and garbage waste disposal.

It has been benefitting the residential and commercial establishments from at least 18 barangays in the municipality of El Nido.

The facility has a capacity to generate about 2,400 cubic meters of wastewater per day, which makes it more efficient than any other STPs in Palawan.

The state-of-the-art facility is a P490-million joint project of the provincial government of Palawan and the municipality of El Nido.

Palawan Water, a water utility infrastructure by the provincial government, generated savings of P170 million because of the office’s pro bono technical service.

In 2018, the DENR ordered a six-month rehabilitation of El Nido after finding out that improper sewage discharges from residential and commercial establishments significantly contributed to the degradation of the island’s water quality.

The facility was inaugurated in September 2021. ###

Department of Environment and Natural Resources (DENR) Acting Secretary Jim O. Sampulna has reminded candidates and their supporters to stay environmentally conscious when conducting campaign activities for the May 2022 national and local elections.

Sampulna made the statement following reports on the use of fireworks and balloons in several political rallies.

“Aside from prohibiting the posting of campaign materials on trees, we also urge the candidates to refrain from using fireworks and releasing balloons during their political rallies. We do not encourage using these materials because it harms the ozone layer,” he said.

According to Sampulna, releasing balloons and using fireworks are “both detrimental to the environment.”

“When the balloons run out of air, their scraps come back to the ground and may end up in the oceans and become marine litter,” Bernardino said.

While marine litter comprises many materials, most of these are plastics, such as balloons, bags, sachets, wrappers, and bottles, among others.

Marine turtles, whales, dolphins, and fishes can ingest these and may cause internal injuries and mortality.

Meanwhile, DENR-Environmental Management Bureau (EMB) Director William P. Cuñado said that fireworks propel chemicals and heavy metals in the air, which if inhaled may cause adverse effects on human health.

“Fireworks contain chemicals such as heavy metals and may emit harmful gases and fine particles such as particulate matter 2.5 (PM 2.5) during combustion, which if inhaled may cause sickness to human beings and pollution to the environment,” Cuñado said.

A type of air pollutant, PM2.5 are tiny particles in the air that reduce visibility and cause the air to appear hazy when levels are elevated. ###