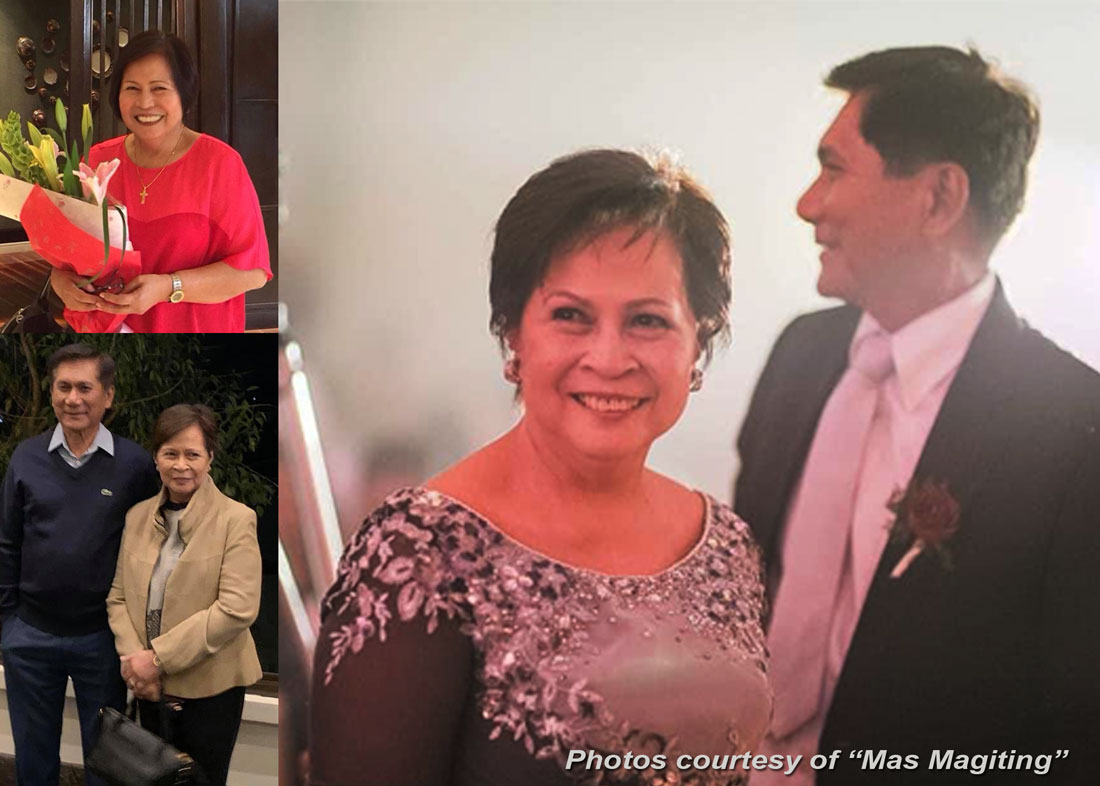 The late Fe Aguillon-Cimatu, affectionately known as Ma’am Fe, was not an ordinary housewife. She was the good woman of the house of Department of Environment and Natural  Resources Secretary Roy A. Cimatu, a former general and chief-of-staff of the Armed Forces of the Philippines.

Hands-on as she was known, Ma’am Fe even took charge of their wedding. She was her own wedding planner. The then-general groom-to-be was still in Marawi for a military operation, four days before their wedding. Ma’am Fe assured him that everything was in place and said “ikaw na lang ang kulang.”

Having a military husband was not an easy task, but Ma’am Fe did not see it as a stumbling block in her married life.

During several combat operations of Gen. Roy, the loving wife visited him. There were times when the husband rushed back to the barracks to see the wife he sorely missed. He would find her in the nearest public market, picking up the freshest vegetables for their evening meal, over which they shared stories.

The responsible and caring wife from then on was always by his side, not just witnessing his journey but also serving as cheerleader as he took charge of several high posts.

The reserved housewife, who did not often go out of their house, devoted most of her time to her better half. She opted to stay at home, to make sure that the house was cleaned up, to read books, and to take care of the plants in their mini garden.

Ma’am Fe was so dedicated a house keeper, that instead of employing household help, she personally attended to the needs of her man. She wanted to make sure that whatever he needed was already prepared even before he asked for it.

Ma’am Fe was also a businesswoman, but one whose priority was a good and healthy married life. She had to sacrifice a lot during her husband’s military days, during those times when they could not be together.

There were two times when Ma'am Fe joined her husband during his out-of-the-country assignments. First was in Libya, when he was appointed as special envoy for a delicate assignment; she personally attended to his needs. The other was when he was posted in Poland for another special assignment. On both occasions, Ma’am Fe insisted on joining him, knowing fully well the danger he was facing.

From General Roy to Secretary Roy, from being a wife of a general to becoming a wife of a Philippine government civilian official, Ma’am Fe was there every step of the way. She was not always visible, but she was always felt.

This is the perfect time to talk about the sacrifices and the hardships that women, like Ma’am Fe, have to endure as good partners of great men. As the country welcomes National Women’s Month, we take this opportunity to honor women who have contributed to the successes of men.