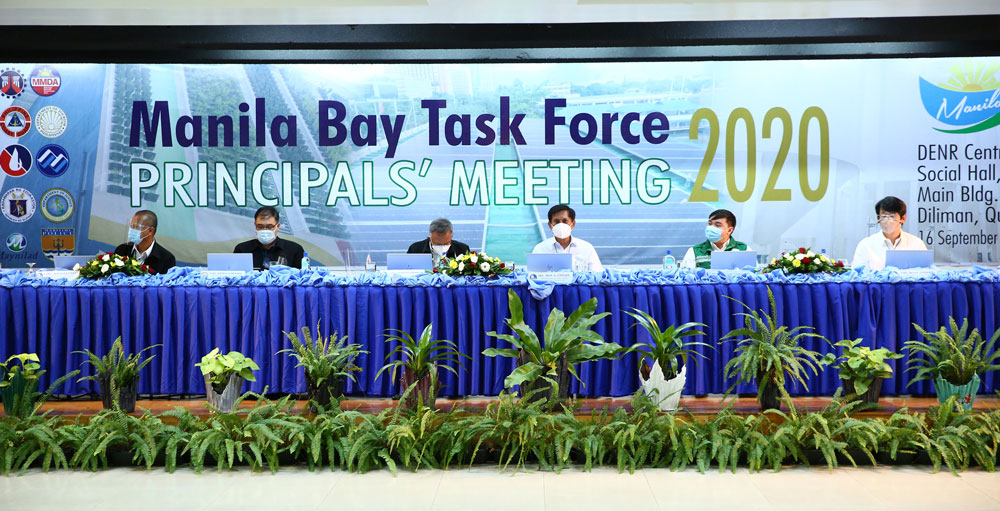 Environment Secretary Roy A. Cimatu has maintained that the use of crushed dolomite boulders in the Manila Bay beach nourishment project poses no hazard to human health and the environment.

Cimatu reiterated his position on the issue when he presided over the meeting of the inter-agency Manila Bay Task Force held on Sept. 16 at the central office of the Department of Environment and Natural Resources (DENR) in Quezon City.

The DENR chief strongly believes the agency had adequately addressed the health and safety concerns raised against the project during a recent budget hearing in Congress.

“I, together with the competent officials of the DENR, faced head-on all the questions about it during the recent congressional hearing on the DENR budget,” Cimatu told task force members.

“I categorically stated that the project has no negative impact to health and the environment, and I will remain firm on my stand,” he added.

During the budget hearing, Cimatu explained that the hazardous ones are the dolomite dust particles with the size of 10 to 15 microns.

He noted that the size of the dolomite being used in Manila Bay is between 2,000 to 5,000 microns or 100 times bigger than dust, therefore it is not suspended in air and cannot be inhaled.

This was validated by no less than the Department of Health, which even assured the public that “no untoward incidents will occur as a result of the endeavor,” referring to the dumping of dolomite sand in Manila Bay.

At the Manila Bay Task Force meeting, Cimatu urged representatives of member-agencies not to be sidetracked by the noise of those who are vehemently opposed to the project.

At the same time, Cimatu said it is important for member-agencies to be on the same page about the issue, as he reminded them their “varying opinion, even with slightest deviation from facts and figures, can easily ruin everything good that we have done.”

“We therefore should speak with one voice. Consult and refer questions if we must, to pass on factual information. Remember that we in the government service are always under close scrutiny of the public,” he pointed out.

At this juncture, Cimatu reiterated that the government’s biggest challenge in the Manila Bay rehabilitation effort is to change people’s behavior towards the environment.

“We must zero in on public apathy. This is the key to sustaining our gains,” he stressed.

Cimatu rallied all agencies involved in the rehabilitation effort to remain focused on their job knowing that “there are still many people who genuinely favor a better environment.”

The beach nourishment project is a significant component of the Manila Bay rehabilitation program, which dates back in 2008 when the Supreme Court issued a writ of continuing mandamus directing the DENR and other government agencies to clean up, rehabilitate and preserve the historic bay.

More than a decade since the writ was issued, it was only under the administration of President Rodrigo Roa Duterte that the government finally set in motion an honest-to-goodness endeavor to bring Manila Bay back to its former glory.

Aside from the beach nourishment project, the DENR and other mandamus agencies are also conducting regular cleanups and dredging operations along Manila Bay and its tributaries.

A state-of-the-art sewage treatment plant had been installed along Roxas Boulevard and three more will be constructed within Metro Manila. The DENR is also closely monitoring compliance by commercial and residential establishments with the country’s clean water law and other pertinent rules and regulations.

The government has also started relocating informal settlers living along the coast of the bay since they are known to be largely contributing to pollution in the area. #