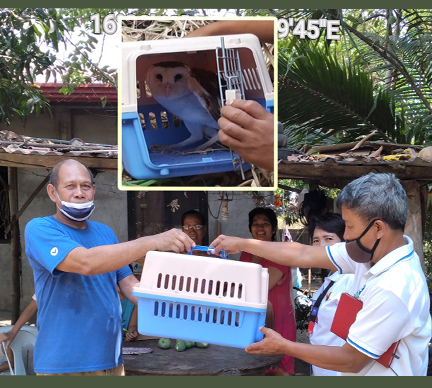 The young owl was discovered by Gil Elopre in his rice field at Barangay Nagrebcan in the morning of May 10. He brought the owl home and kept it until he decided the following day to call the hotline of the DENR Action Center based in Quezon City to report the incident.

After getting a call from Elopre, the action center immediately notified the PENRO in San Fernando, La Union, which then assigned wildlife enforcement officers (WEOs) to coordinate with him and conduct the rescue operation.

The barn owl, measuring 18 centimeters and weighing 2 kilograms, has been found healthy and without injuries upon inspection by WEOs. As such, the La Union PENRO decided to release the raptor in a forested area in Naguilian town the same day it was rescued.

DENR Undersecretary Benny D, Antiporda has commended the La Union PENRO for the prompt rescue operation despite the general community quarantine enforced in the province due to the COVID-19 pandemic.

“The team’s speedy action is laudable,” Antiporda said. “The DENR, through its field offices, has proven once again its seriousness in fulfilling its mandate to protect and conserve wildlife species even with the pandemic crisis.”

Barn owls, which belong to the Tytonidae family, are widely found in different continents around the world and are known for eating rodents like mice in agricultural lands.

Despite the stable population status of barn owls in the Philippines, the DENR still gives importance to the wildlife species as they contribute to the ecological balance of nature by eradicating pests.

Earlier this month, DENR Secretary Roy A. Cimatu appealed to the public to leave wild animals alone, unless they are sick, orphaned or injured, as reports of their sightings have increased during the COVID-19 pandemic.

Cimatu said that possession, transportation and importation of wild animals are regulated under Republic Act 9147 or the Wildlife Resources Conservation and Protection Act of 2001.