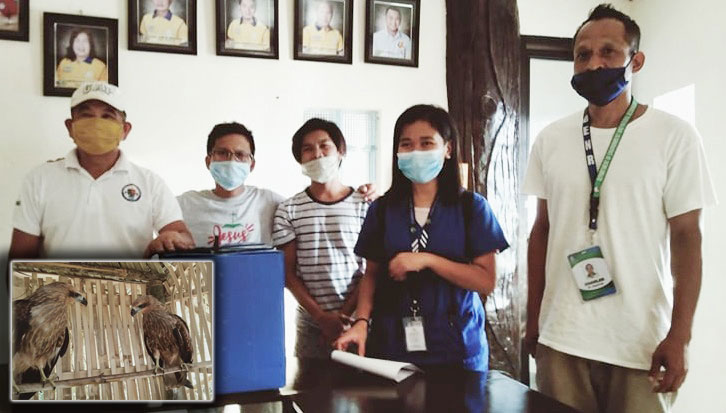 The Department of Environment and Natural Resources (DENR) is asking the public to leave wild animals alone as reports of their sightings have increased, especially in Region 4A or Calabarzon, during the COVID-19 pandemic.

“With the increased sightings of wild animals occurring in the Calabarzon region, it is important that we remind the public to leave them alone, unless they are sick, orphaned or injured as we have wildlife experts who can take care of them,” DENR Secretary Roy A. Cimatu said.

Cimatu noted a rise in the number of people reporting wildlife sightings in the region since the entire Luzon was placed under the enhanced community quarantine (ECQ) to contain the spread of COVID-19, the latest of which are the two juvenile species of Brahminy kite (Haliastur indus) spotted in Mabini, Batangas.

The DENR chief said it appears that the restrained human activities resulting from the ECQ was helping nature and biodiversity rediscover their natural spaces.

“According to our wildlife experts, animals feel much more comfortable going around because there are lesser people in the streets and public spaces because of the continuing ECQ,” Cimatu pointed out.

Last May 10, a team from the head office of the DENR’s Biodiversity Management Bureau (BMB) in Quezon City went all the way to Batangas to retrieve the young Brahminy kites after receiving a call from a certain Christian Atienza to whom the hatchlings were turned over by Philip Ramos who found them near his residence in Barangay Sto. Tomas.

Ramos reportedly tried to release the juvenile raptors back into the wild but they kept returning to his house, prompting him to turn it over to Atienza, his neighbor. Atienza later decided to call the BMB after some people started taking interest in the animals and threatening him in exchange for the raptors.

The raptors were brought to the Wildlife Rescue Center in Quezon City where they will stay until they are ready to be released back into the wild.

Cimatu warned that human interference with wildlife could result in disease or injury, and taking the animal out of the wild limits its chances of surviving.

Where an animal is in need of help, Cimatu said it requires specialized care to recover and return to the wild, that is why it is important to report cases of sick, injured and orphaned wildlife to the BMB.

Cimatu said that possession, transportation and importation of wild animals are regulated under Republic Act 9147 or the Wildlife Conservation and Protection Act of 2001. ###