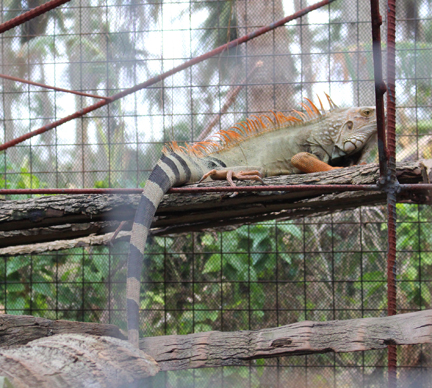 The Department of Environment and Natural Resources (DENR) has urged the public to keep reporting suspicious activity after a tip-off led authorities to seize various exotic animals worth P300,000 and arrest three suspected wildlife traders in Oriental Mindoro last Tuesday.

A total of 56 heads of wildlife species—including the endangered green iguana and red-footed tortoise—were recovered from a raid conducted by operatives of the Philippine Operations Group on Ivory and Illegal Wildlife Trade or Task Force POGI at the residence of one of the suspects in Barangay Banus in Gloria town.

DENR Secretary Roy A. Cimatu said the raid was a positive example of how members of the public reporting information to authorities makes a difference in the fight against illegal wildlife trade.

”Therefore, we urge them to continue to be our eyes and ears, and together, we could make a real difference to the future of all wildlife species, especially those considered endangered or threatened,” he added.

Prior to the raid, Task Force POGI received a tip that an alleged illegal wildlife trader residing in Oriental Mindoro was temporarily shelteringvarious wildlife species from Palawan before being transported to different buyers across the country.

A surveillance then ensued until the task force confirmed that endangered wildlife were being kept in the house of a certain Fernando Zamoranos Jr.

Zamoranos, together with Zam Angelo Zamoranos and Jessie Dacutanan, was arrested and charged with violation of Republic Act 9147 or the Wildlife Resources Conservation and Protection Act of 2001, which defines and penalizes illegal possession and trading of wildlife species.

Under the law, violators could face a jail term of up to 12 years and a fine of not more than P1 million.

Task Force POGI is a composite team of wildlife law enforcers from various agencies including the DENR’s Biodiversity Management Bureau and the National Bureau of Investigation-Environmental Crime Division.

The Provincial Environment and Natural Resources Office in Oriental Mindoro assisted the task force in carrying out the raid at Zamoranos’ residence. ###