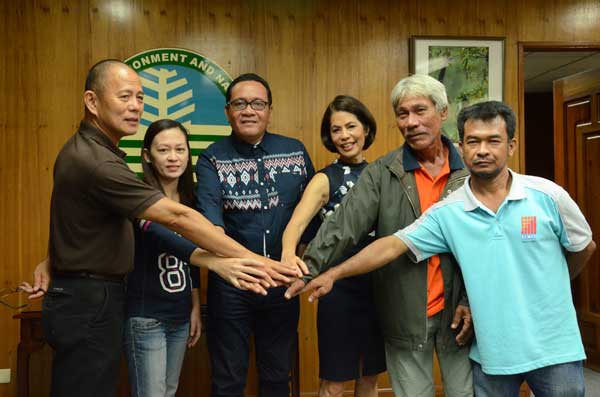 Members of the “Save Antique Movement” have found allies with Environment Secretary Gina Lopez (3rd from right) and Fr. Robert Reyes (left).  The group, led by its president Benjamin Magan (2nd from right) paid a courtesy call on the DENR chief in Quezon City to appeal to her to put a stop to the destruction of their livelihood and environment due to irresponsible mining activity in Semirara Island, including issues of land grabbing and displacement.  Also in photo are (from left): Estela Marie Aguirre, Virgilio Sanchez and Jimsy Balestramon (right), all residents of Semirara Island. ### 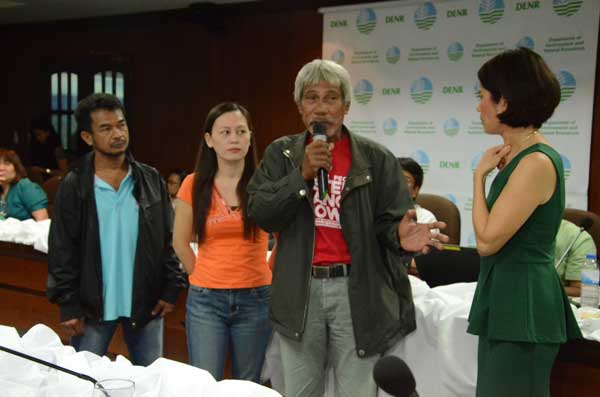 Members of the “Save Antique Movement” narrate how their lifestyle and livelihood have been adversely affected by the coal mining project in Semirara during a press conference called by Environment Secretary Gina Lopez (right) Thursday (August 11) at the DENR central office in Quezon City.   The group’s president Benjamin Magan (with microphone) also spoke of the destruction of coral reefs and seaweeds, dwindling mangroves and siltation of bodies of water in the area prompting Lopez to issue a “show cause order” to Semirara Mining and Power Corp. to temporarily suspend its environmental compliance certificate.  Also in photo are (from left):  Jimsy Balestramon, president of Sabang Farmers-Fishers Association and Estela Marie Aguirre, also a resident of Semirara.  ### 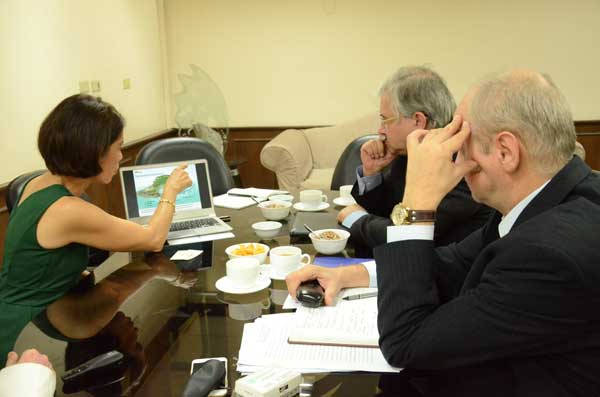 Environment Secretary Regina Paz Lopez (left) presents  to Russian Ambassador to the Philippines Igor Khovaev (2nd to the left) and his associate, the adverse impact of mining on the environment during their courtesy visit Thursday (August 11) to the Department of Environment and Natural Resources in Quezon City. The visit of H.E. Khovaev aims to explore possible cooperation between the two countries on natural resources management and development, including mine rehabilitation. ### 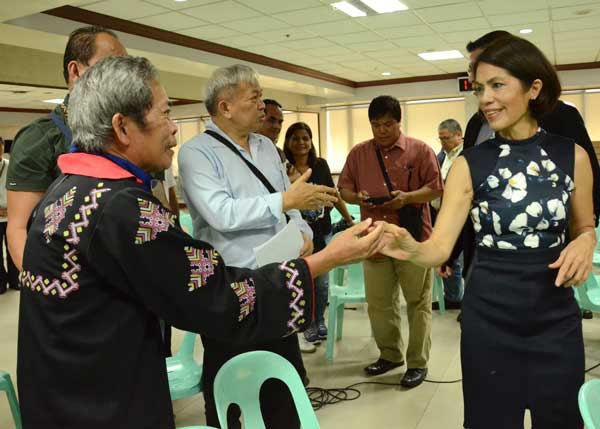 Environment Secretary Gina Lopez welcomes a member of an indigenous group who attended the first People’s Day held Wednesday (August 10) at the DENR central office in Quezon City.  Around a hundred individuals from various sectors, including indigenous peoples, non-government organizations and other ordinary citizens, came either to present the concerns of their communities or extend their support to the new administration through partnership.  On hand to assist Lopez in responding to issues raised are key officials of the department, including those of bureaus and attached agencies. Lopez said that henceforth, People’s Day will held every Wednesday in all DENR offices nationwide to allow officials and employees to address public concerns and queries. Aside from “People’s Day”, the public can call or text, 0917-552-9344, or send an email to This email address is being protected from spambots. You need JavaScript enabled to view it. for their concerns. ### 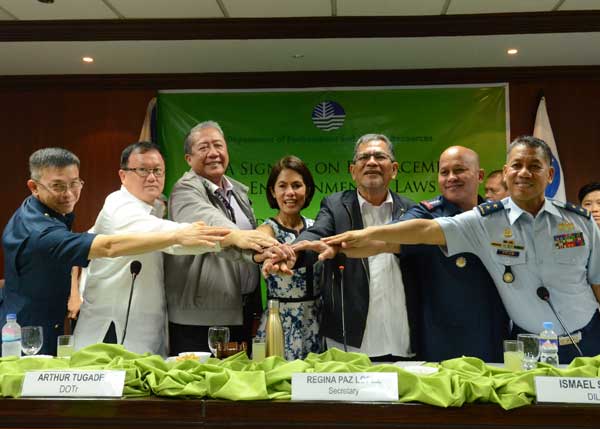 Department of Environment and Natural Resources (DENR) Secretary Gina Lopez (center) has found allies in her mission to protect and save the environment. Officials of six government agencies, namely: (L-R) BGen Restituto F. Padilla Jr. of the Armed Forces of the Philippines, Undersecretary Eduardo del Rosario of the Department of National Defense, Secretary Arthur Tugade of the Department of Transportation, Secretary Ismael Sueno of the Department of Interior and Local Government, Director General Ronald “Bato” De la Rosa of the Philippine National Police, and Rear Admiral William Melad of the Philippine Coast Guard signed a memorandum of agreement with Lopez for the creation of a national anti-environmental crimes task force, also to be known as “A-Team Kalikasan” to run after large-scale environmental offenders.   The signing was held Monday (August 8, 2016) at the DENR central office in Quezon City. ###