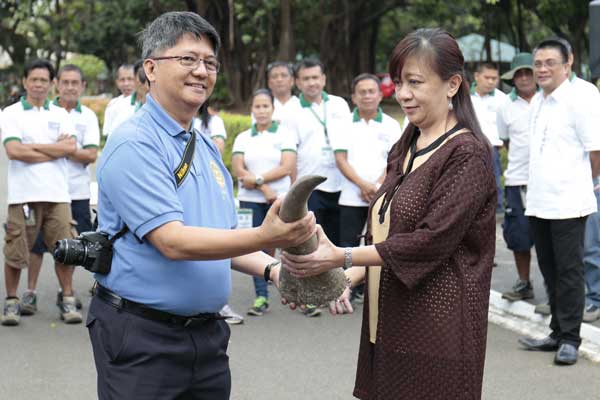 Director Theresa Mundita Lim (right) of the Biodiversity Management Bureau (BMB) of the Department of Environment and Natural Resources (DENR), receives one of six horns of rhinoceros from Lt. Angelito Cruz (left) of the Bureau of Customs, in a formal turn-over ceremony held at the Ninoy Aquino Parks and Wildlife Center on Monday (Feb. 27). The six rhino horns, estimated to cost around P74M in the black market, were seized in 2012 by the Bureau of Customs and believed to have originated from Mozambique. However, Lim said the seizure will be subjected to DNA test  to confirm their origin before deciding on their disposal, that is, either to return to the country of origin or be destroyed. ###