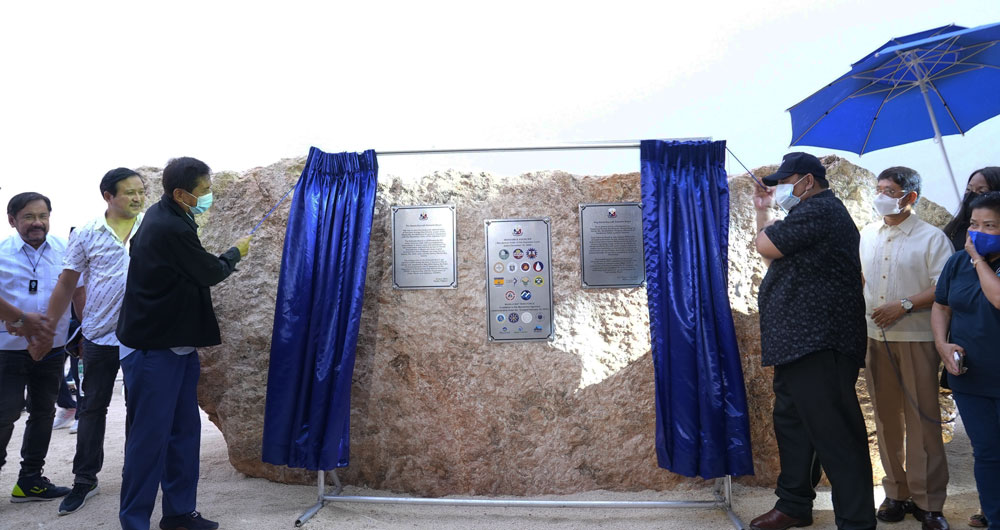 Department of Environment and Natural Resources (DENR) Acting Secretary Jim O. Sampulna (4th from right) and former DENR Secretary Roy A. Cimatu (3rd from left) unveil the marker of the Manila Baywalk Dolomite Beach mounted on a dolomite boulder rock. The 500-meter by 60-meter beach nourishment project of the DENR and the Department of Public Works and Highways (DPWH), is part of the continuous rehabilitation of the Manila Bay in accordance with the writ of continuing mandamus issued by the Supreme Court in 2008. The beach was opened to the public on June 12 coinciding with the 124th celebration of the Philippine Independence Day. Also in photo are (L-R): DPWH Assistant Secretary Wilfredo S. Mallari, DPWH Undersecretary Roberto R. Bernardo, Department of the Interior and Local Government Secretary Eduardo M. Año, US Embassy representative Kelia Cummins (partly hidden), and Metropolitan Waterworks and Sewerage System Administrator Leonor C. Cleofas. ###